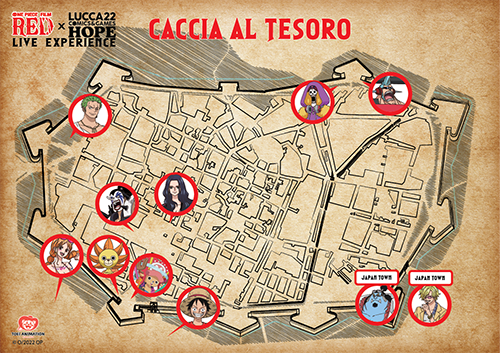 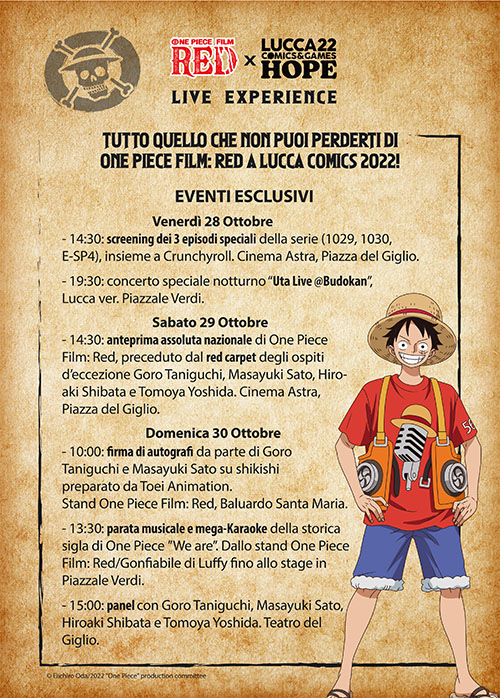 We have recently revealed TOEI Animation Europe and Anime Factory’s premiere of the greatest Italian One Piece event ever at Lucca Comics & Games 2022. We also announced the presence of the director and master Gorō Taniguchi on Saturday, 29th October at the national premiere of “One Piece Film: Red”. We are now ready to reveal all the incredible initiatives that await us in Lucca from 28th October to 1st November to participate in a unique celebration all together… and maybe break a few records.

Toei Animation wants to build stronger collaborations with Lucca Comics & Games 2022 in order to give Italian fans the greatest experience to celebrate the true year of One Piece! Exactly like “One Piece Film: Red” - which brings pirates, fans and sailors to the island of Elegia for a great festival - we invite all One Piece fans and cosplayers to come to Lucca, to enjoy the festival with the presence of "One Piece Film: Red" throughout the city and have fun with all the planned activities, made in collaboration with many partners. The Italian film premiere will be enriched by the presence of very special guests: the film director, Gorō Taniguchi, and Animation Director, Masayuki Sato. You can find all the events planned for LC&G 2022 below.

October 28th - To begin our celebrations, don’t miss the special screening for all Crunchyroll partners and friends. You will be able to watch three special One Piece episodes dedicated to Luffy, Uta and Shanks! Details will be available soon.

• After the screening, at 7:30 PM, remember to gather all together in a special location, where you can enjoy a sound and light show: UTA Live from Budokan Night Projection! Details will follow in the coming days.

29th October - Italian premiere of “One Piece Film: Red” at Cinema Astra, Piazza del Giglio. The Italian premiere will be in its original language with subtitles. Gorō Taniguchi (Director), Masayuki Sato (Animation Director and Character Designer), Hiroaki Shibata (Producer). The screening will follow the official red carpet (3 PM), attended by our Japanese guests and part of the Italian cast and celebrated with gadgets and special effects. The cost of the ticket for the premiere is included in the Lucca Comics & Games ticket valid for Saturday, 29th October. Details on how to book the premiere ticket will be announced in the coming days.

30th October - Interview with Gorō Taniguchi at Teatro del Giglio, in parallel with Masayuki Sato’s live drawing session. The time of the event will be announced soon.

• Luffy’s crew, One Piece fans from all over Italy, listen to our songs and gather in front of Luffy's Balloon, guardian of the city walls of Lucca! We need your help and your voice for the greatest One Piece karaoke of all time! The event will be hosted by the amazing Emanuella Pacotto, aka NAMI! A musical parade (starting at 14:30 PM) will then take you back to the One Piece stand.

• Autograph signing by Gorō Taniguchi and Masayuki Sato at the “One Piece Film: Red” stand (for a 45-minute long session). Autographs will be signed on a special shikishi prepared by Toei Animation on a drawing by Masayuki Sato. The time of the event will be announced soon.

Here's the list of all the events and activities that every fan will be able to enjoy during the days of the Festival.